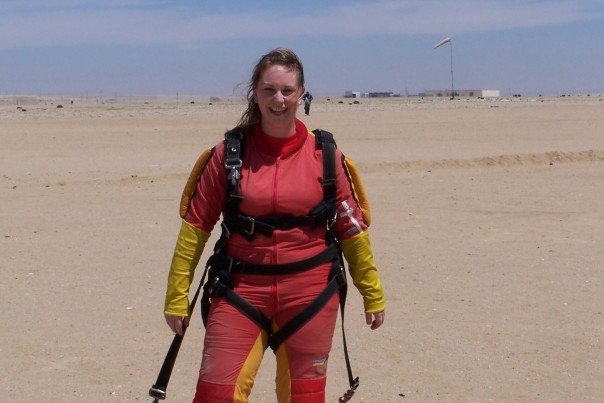 Have you ever had a real case of nostalgia and wanderlust and you put them together and you run around like a chicken with your head cut off trying to find the possessions you have that remind you of that event?

Months and months ago, I went on the hunt for a video, taken of me, skydiving in Namibia in 2006. Pre-kids and marriage, pre-responsibility, prior to having to have a care in the world, when I travelled in places that had rogue scorpions in the outdoor washrooms. When I slept under the stars on the banks of the Orange River… I once chased experiences that made my knees weak and my heart pound hard into my rib cage the moment before I did them.

I even sent an email to the company asking if they have a back-up hard drive from WAY BACK THEN, offering to pay for the video footage again, if they could recover it.

In November 2006, I was on a 24-day overland camping safari with Drifters Safaris through South Africa, Namibia, Botswana and Zimbabwe. One of my favorite stops was Swakopmund, Namibia – the adrenaline oasis of south western Africa. Sand dunes to ATV on! Ocean! Sky diving! Incredible foodie experience (oryx tar tar anyone?), it was amazing. And it’s been a little over ten years since I was there and I’m craving that adventure or any kind of adventure again. I need to some adrenaline to fill my bucket. However, a lot has changed through the years… marriage, two young children, job, routine, sleep, slump, repeat.

A couple weeks ago, while looking for something else and extremely unrelated in the deep bowels that are my storage boxes, I stumbled upon a CD of pictures from the trip. I brought it home, loaded it up on my computer and it opened up a big flood of memories. I used to do some crazy things before I birthed my beautiful children and now, I stop myself before the point of no return with the thought of: “HOLY CRAP, I HAVE TO TAKE CARE OF THEM, I CAN’T RISK MY LIFE!” 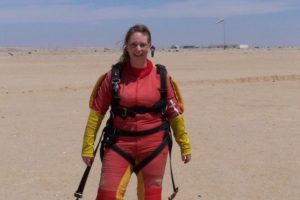 It’s this new-found irrational fear that now stops me from jumping on the stand up roller coaster that I used to love. A feeling of guilt and impending responsibility that stops me from having that third glass of wine at a restaurant. The hesitation to update my open water diving certification so I can scuba dive on my next vacation. Will I ever be able to let go again and take the risk?

The picture of me post skydive says yes, yes I will. Perhaps I will be that 90 year old woman who jumps on her birthday, because why not? Her kids are grown, educated and independent, her house is paid off, her funeral is pre-planned. Not that I’m counting down until I’m 90, but I’m definitely looking forward to my children’s autonomy in 15 years or so…

In the end, I did find it! The video did exist in the next lower bowel of boxes in my storage locker. Mad props to my friend, Rebecca who did the jump as well! I edited the video down and if you are curious to see what my face looks like at 10,000 feet in the air, check out the video!

***This post originally appeared on RealityMoms.rocks. I have reposted with permission*** 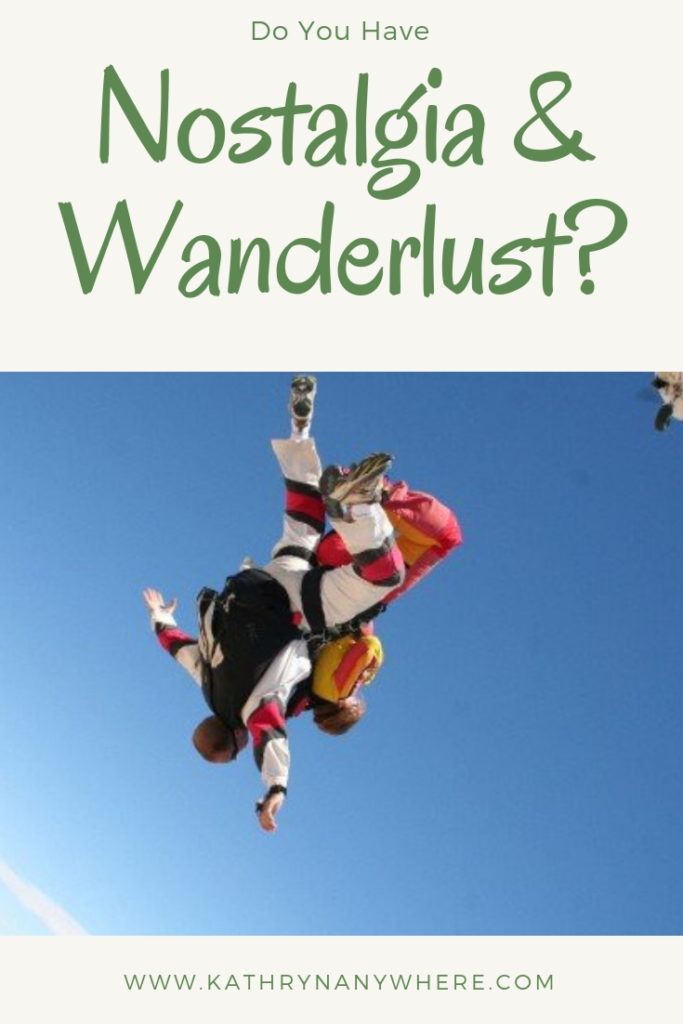