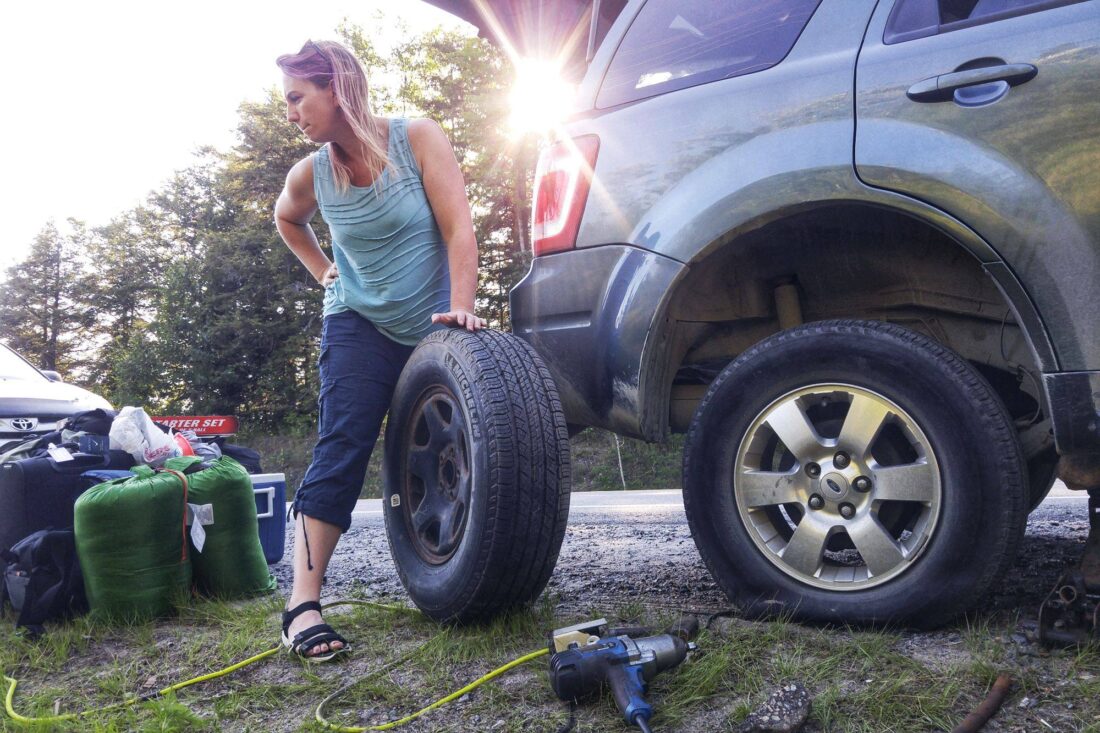 I got a flat tire and then the car battery died. On a trip with my kids. I’m the queen of being prepared and in this instance, I was not. Learn from me.

It was last Sunday afternoon, we were making good highway time driving between home in downtown Toronto and Bonnechere Provincial Park – the intended destination for the week. The kids were enjoying the drive for the most part, my friend/photographer/pseudo uncle to the kids, Brian was with us, we had just stopped at Honey’s Diner, outside Apsley for ice cream and leg stretching.

Then, about 18 km away from reaching Bancroft on highway 28, a sudden “bump in the road”! The low tire pressure warning on the dashboard came on and it was serious judging by the thumping noises coming from underneath the car. I did what any responsible driver would do – I googled how far away we were from a gas station to get air in the tires. Seeing we were on the map, I pulled over, assessed the situation and luckily we were in a cellular service area so In called CAA. Dispatch initially said a tow truck would arrive in about 45 minutes, so we waited, I got impatient and the kids were getting restless strapped into the back seat still, so we took a closer look at the flat, unloaded all of our gear from the back of the vehicle and located the jack and tire iron. 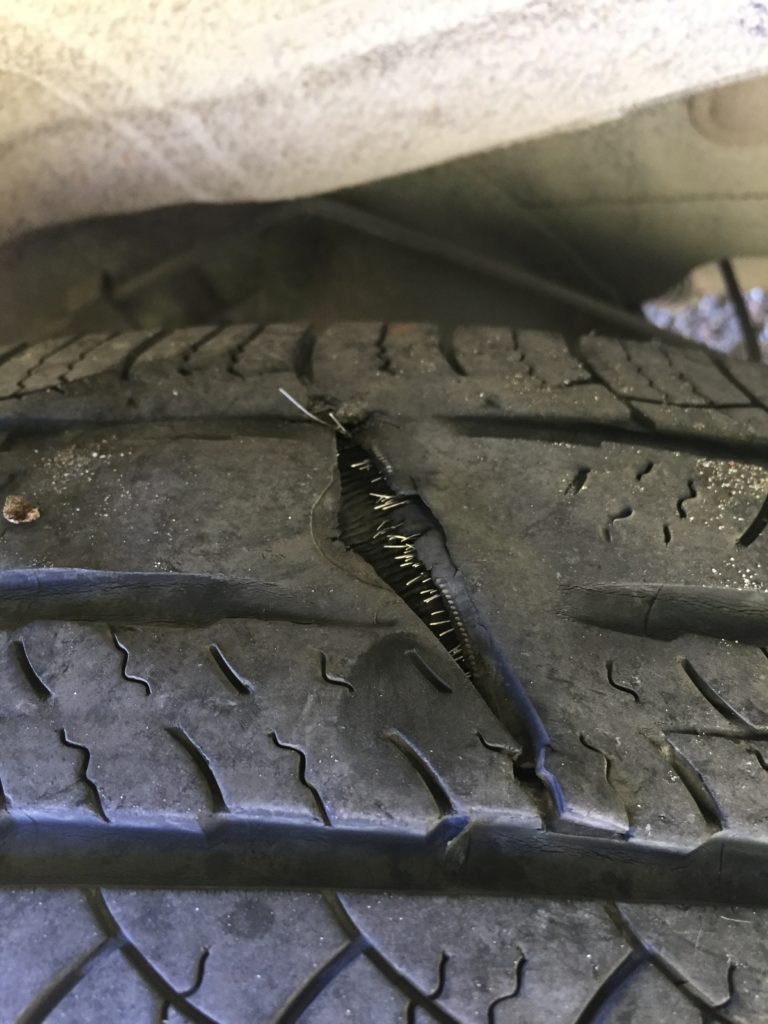 PRO TIP – There are two hidden compartments in the trunk of a 2011 Ford Escape.

It turns out that each wheel had a security lug-nut on it, and the key was nowhere to be found – it was at one time in my trunk, but wasn’t at this moment (I did locate it once I got home, wah wah). This meant only four out of the five nuts could be removed, but the wheel itself would not be coming off. Now I have to tell you, I’m the queen of being prepared and in this instance, I was not. Learn from me kids. 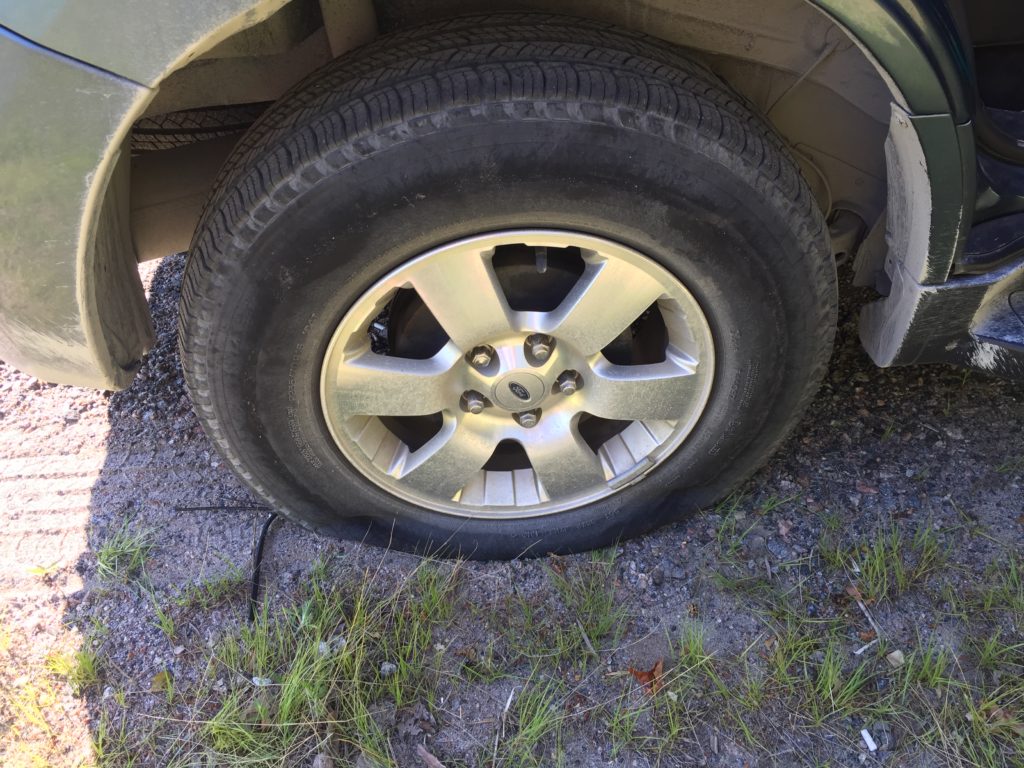 By this point, one gentleman driving by had stopped to lend a hand and helped us extract the spare tire from the underbody of my Escape. This gentleman was an absolute gem, genuinely wanted to help and see us on our way. I have to admit, I was surprised to this selfless act of kindness. We had been stuck on the roadside for almost an hour at this point and I didn’t expect anyone in the least to slow and check in to see if we were okay. The whole idea of taking time out of your day to assist someone else just isn’t something we do anymore unless there is something in it for us.

We were at a stalemate, the tire wouldn’t come off and we had no way to extract that last lug-nut. CAA’s online status page now said the tow would not arrive until 7:30 pm, and that was still about two hours away! I called to verify this was a fact or a digital blip and unfortunately, it was a fact.

While we were all standing around wondering what to do next, I learned a few things about this gentleman, whose name I never caught. Last year, his daughter was driving from the Prairies to Tobermory in a Volkswagon Jetta, when she hit a moose on the TransCanada highway just outside Thunder Bay. She was banged up really bad and one of the nurses at the hospital knew a guy who had a storage facility and could store her stuff. Instead of storing it, the guy from Thunder Bay DROVE it himself all the way to Tobermory to help out, staying with friends and family along the way. The gentleman who stopped to assist us was simply just trying to pay it forward in life. Our situation was not nearly as dire or even on the scale of desperate, but he still saw someone in need and decided to help. 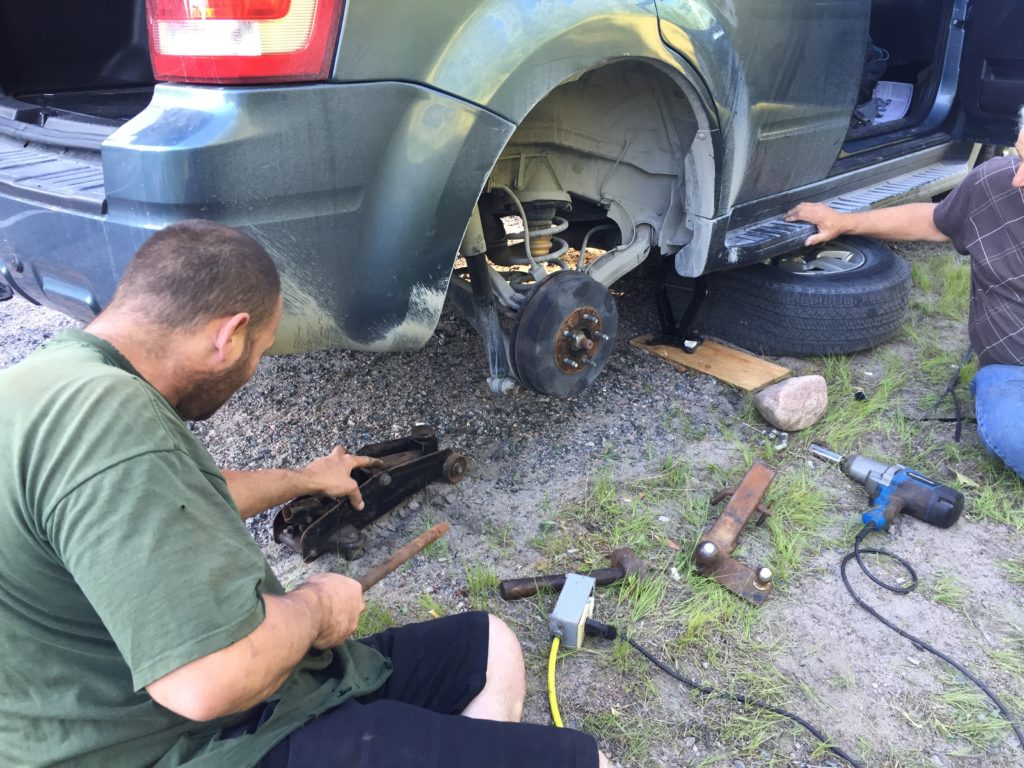 At just the right time – and by right time I’m talking about the kids wanting to run amuck and get out of the car, a second guy pulls up on the shoulder behind us. He runs up, assesses the situation, dashes back to his van, pops his hood, and starts running an extension cord towards us. As it turns out, he just happened to have an impact wrench along with a 12-point socket and a small sledgehammer, and was able to remove the locked lug-nut with brute force. Turns out he’s a mechanic on the side, that was super handy for us.

And then… One jack wasn’t enough to raise the car body high enough off the shoulder, so a second one was used underneath the rear strut to raise just the wheel assembly high enough to replace the blown tire with the spare. This of course was all figured out on the fly without any hesitation from our helpers.

While they were lowering the jacks, a third vehicle pulled up to our little roadside party. Turns out it was the second guy’s family who were swimming at a nearby lake, wondered why dad hadn’t showed up yet, and drove back to see what was going on. We were done at that point, so he packed up all his gear and drove off with his wife and kids leading the pack – he left before we could get his name or offer a token of appreciation. The first fellow stuck around for a bit longer to chat, declined a bottle of wine as a thank you and soon he was on his way as well.

It was 7 pm now, approximately two hours since we pulled over. Nightfall was still a few hours away and the weather was great. I called CAA to cancel the tow, Brian and I packed the stuff back into the trunk and we both got back in the car. We could still make it to Bonnechere before the park office closed for the evening at 9 pm… except now the car wouldn’t start! FFS, for real. The hazard lights had been on the whole time. Normally that shouldn’t cause any problems, but it turns out that there was a dead cell in the car battery and would need to be replaced. At that exact moment of my about to lose it into a anger induced tirade laced with profanity, the tow truck from CAA pulled over… A quick blast from the portable jump starter and we were finally on our way again!

But what really made the difference was the generosity of two strangers, strangers that likely held different political ideals than us, who likely had different careers and upbringings and that didn’t matter to them, who took an hour out of their Sunday evening to help us out.

Neither took any payment, so all we can offer them is our thanks and a promise to pay it forward. And we will. 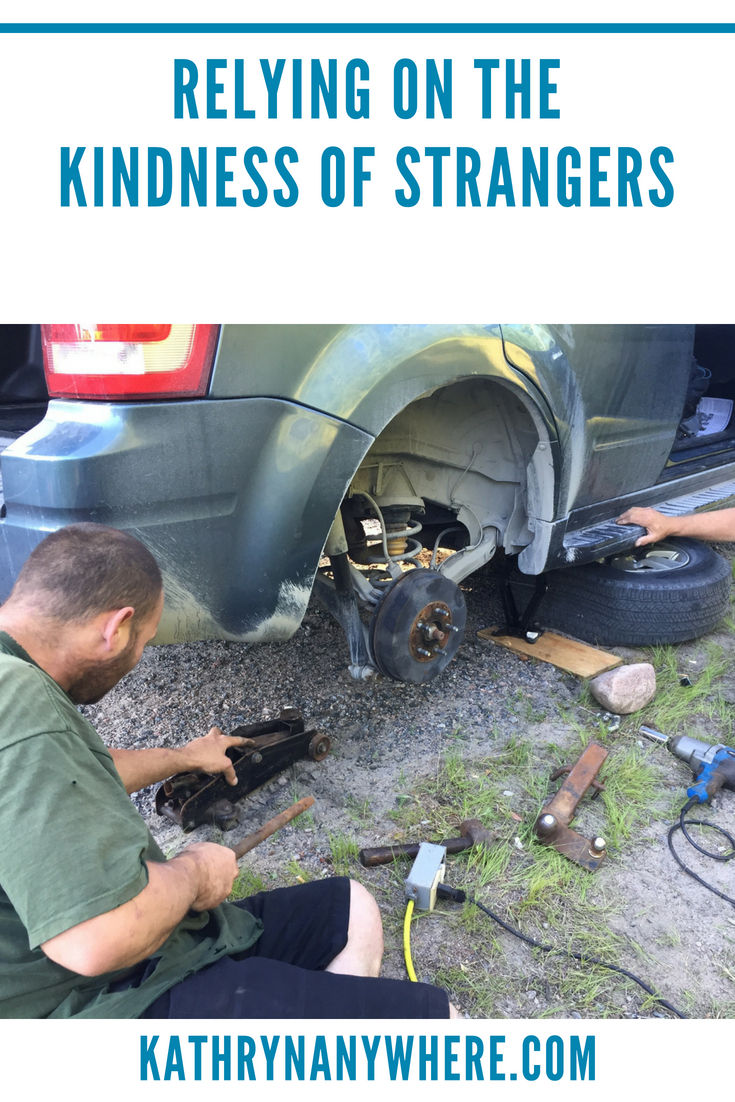 *** Much of this post has been compiled from Brian’s comments on a Facebook photo album of the debacle. I have edited and added some details here and there ***