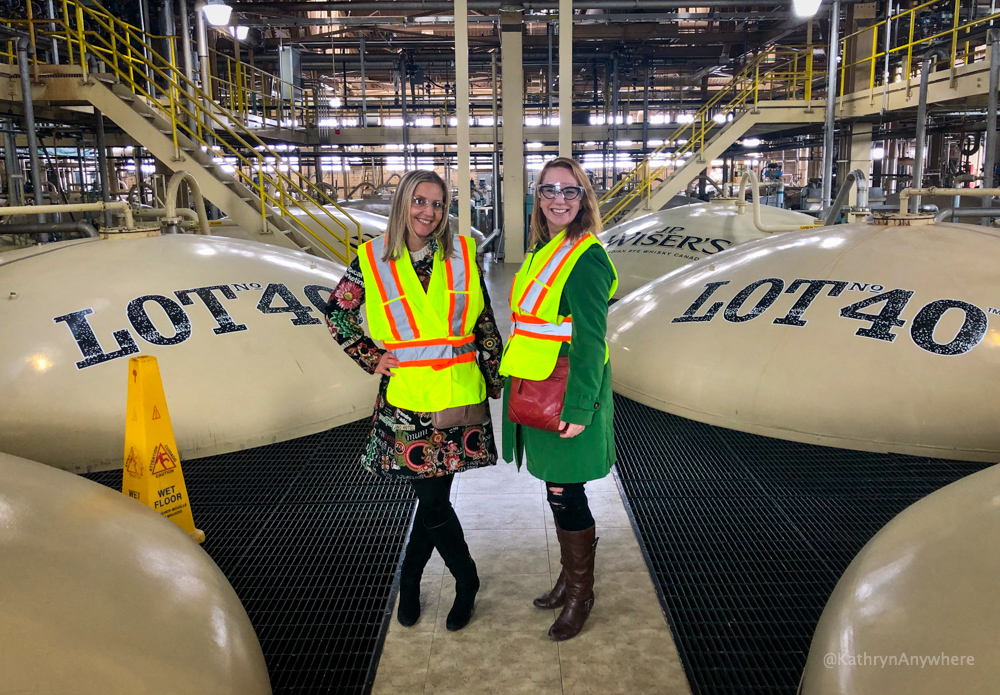 One of the best things to do in Windsor, Ontario, in my humble opinion is The J.P. Wiser’s Experience, also known as the Hiram Walker Whisky Tour. When I think back on memorable experiences, this is definitely one of them. Not only do you get to tour through the cooking, fermentation, and distillation areas, the tour concludes with a whisky sampling session. Definitely worth it! Read on to learn about the history of whisky in Canada and what we sampled at the end of the tour.

I was hosted by Visit Windsor Essex in November 2019 with my friend, Kasia from Kasia Writes to cover the Windsor International Film Festival and have a girl weekend getaway. Whisky was a big part of the fun! 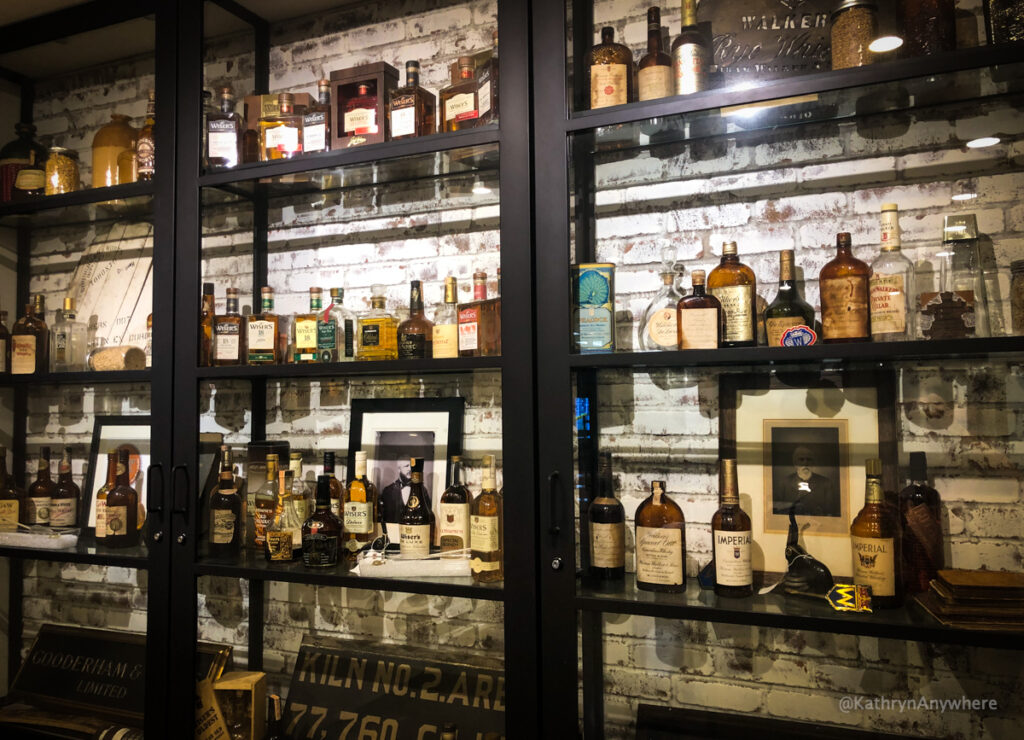 Who is J.P. Wiser and Hiram Walker?

John Philip (J.P.) Wiser owned and managed farms in Canada and the United States. In 1857, he bought a distillery in Prescott, Ontario and the following year, he started importing corn from the United States. During this time he was growing his own grains – rye, barley and wheat and experimenting with flavours. After profiting from the American Civil War, he used some of his proceeds to purchase bushels of grain, new malt houses, a rectifier column, a copper tank receiver and a cooperate. By the turn of the century, J.P. Wiser was exporting whisky all over the world and was the third-largest distillery behind Hiram Walker and Gooderham & Worts.

In 1838, Hiram Walker moved from Boston to Detroit to work in a grocery store. Working his way up, in 1846, he began to operate his own store and started wholesale grain trading with local farmers. Seeing an opportunity, sometime in the early 1850s, Hiram was buying moonshine and using it to make blended whiskies to sell in his store. He was so successful that in 1857, Hiram bought 468 acres of land across the river, in Windsor, Canada. On it, he built the Hiram Walker & Sons Distillery.

Other noted Whisky Barons in Canada are Gooderham and Worts and Henry Corby. In 1846, Gooderham and Worts singlehandedly changed the practice of distilling in Canada. Their double distillation method gave birth to a light, smooth whisky instead of the unbearably harsh moonshine. Their distillery is the famed, no longer in use distillery in Toronto’s Distillery District.

Henry Corby bought a flour mill on the Bay of Quinte in 1853. Four years later he began distilling the mill’s surplus grain in Corbyville just north of the city of Belleville, Ontario. Henry imported US corn for his light whiskey, but he also added his own homegrown rye to add flavour and his personal character. 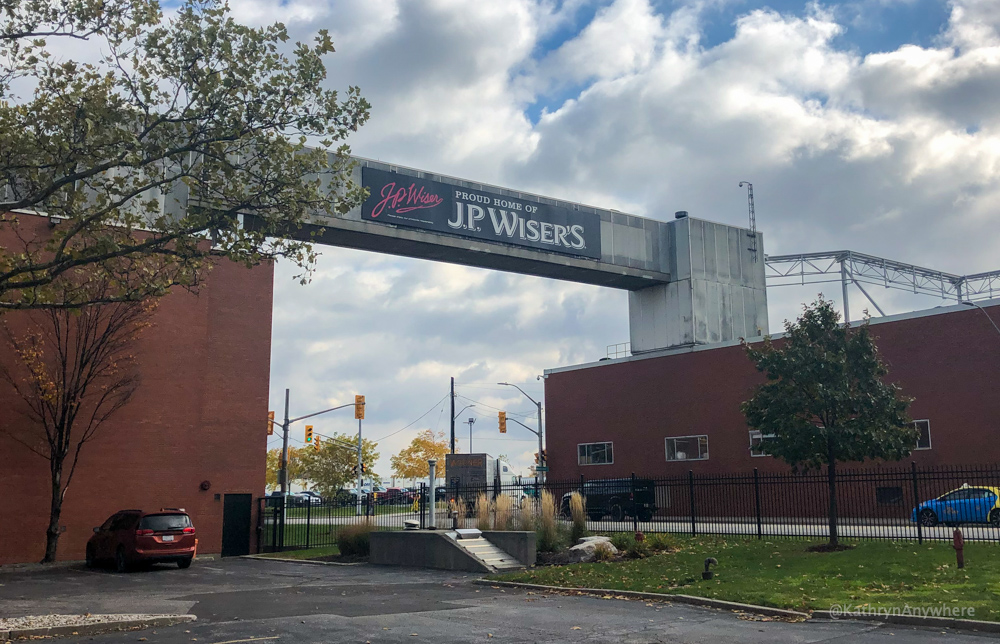 What Is Canadian Whisky? And Why Do We Call It Rye Whisky?

Canadian whisky is called rye whisky because long ago, rye was the predominant grain used in the mash. The first recorded whisky making in Canada is in 1769 at a distillery in Quebec City. By the 1830s, more than 250 distilleries were using surplus harvest grain to produce an oily, pungent moonshine.

Americans in the northeast referred to it as rye to distinguish it from American whiskeys like bourbon. (Note, Canadians spell it whisky – no “e”). Why rye? Rye is a very hardy grain that withstood the colder Canadian temperatures. Hence, Canadian Whisky came to be known as rye whisky. 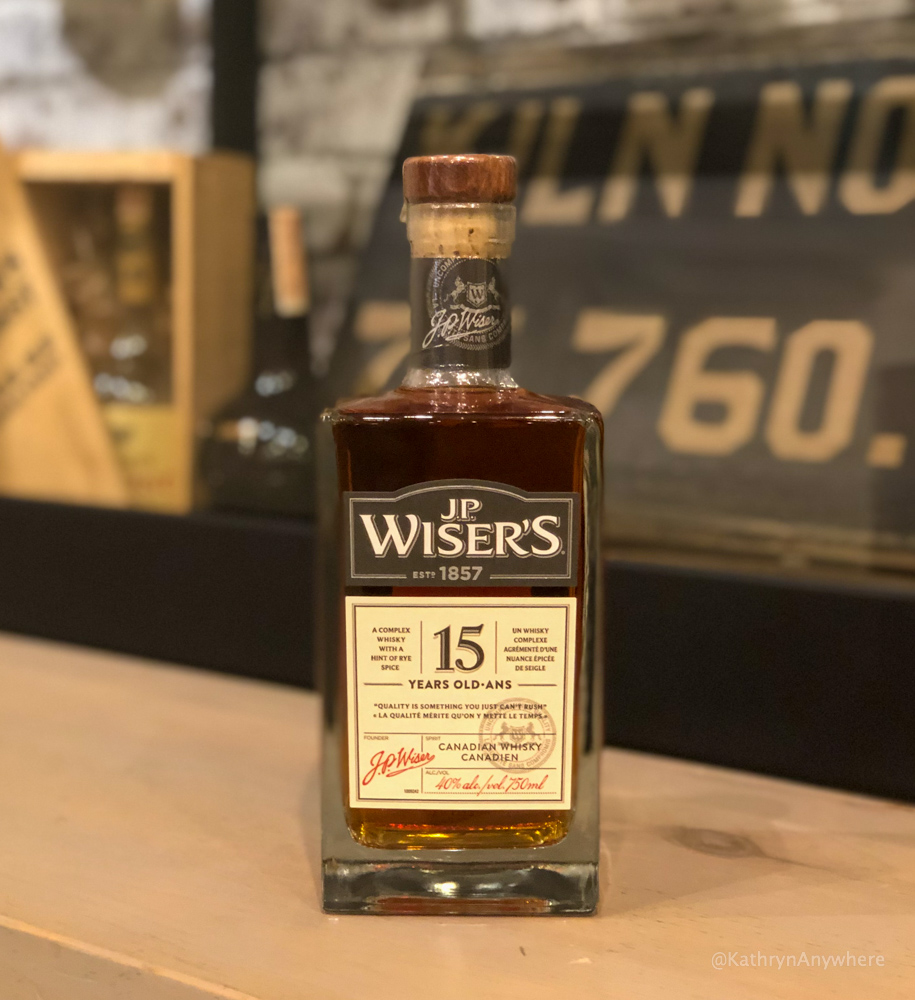 In order to be called Canadian whisky, the rules and legal definition is pretty simple:

Canadian ryes generally have a higher rye content, but there’s no law that says rye actually has to be used.  Confused yet? It’s not rye whisky if it isn’t made with rye. It’s just called Canadian whisky. 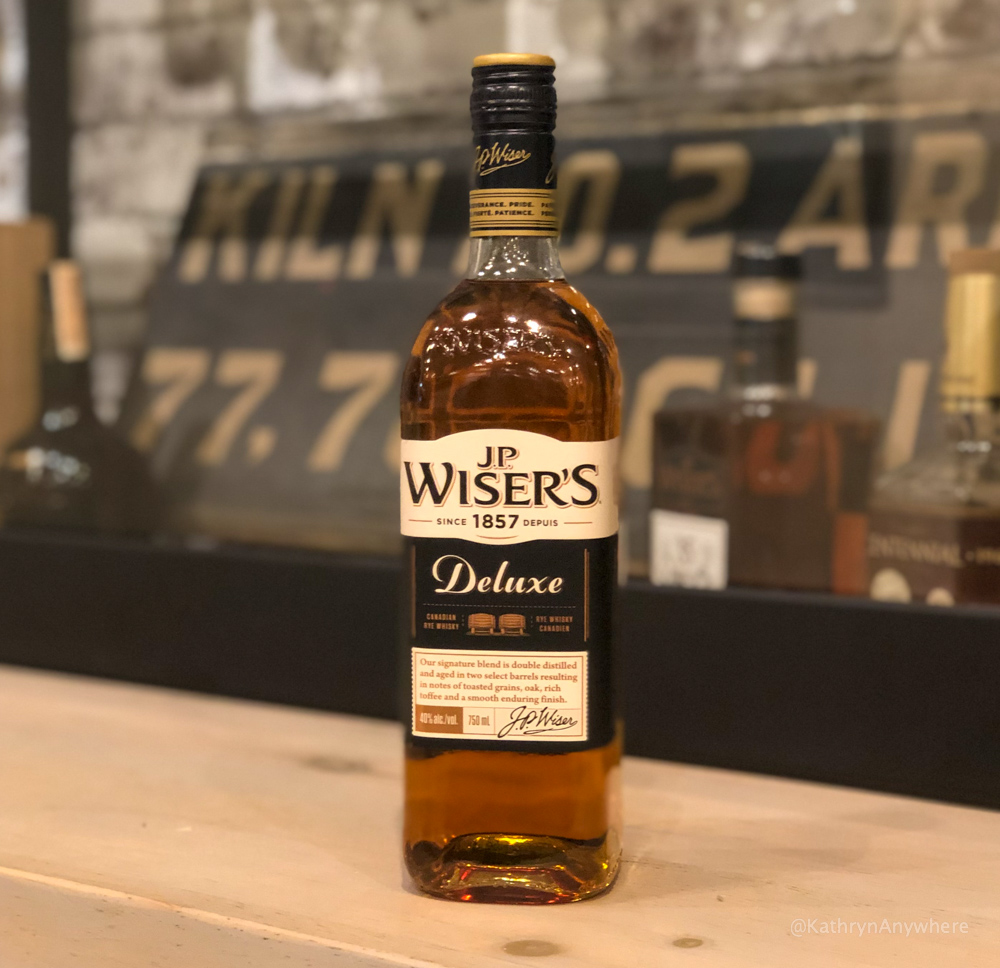 Bourbon is American whiskey that is made primarily from corn. Corn must make up 51% of the mash. Bourbon sold in the United States must be produced in the U.S. and stored in a new container of charred oak.

For reference, American rye whiskey must have 51% rye in the mash bill. So, Canadians use a variety of different mash bills – that’s a combination of grains (rye, wheat, corn or barley) in different proportions and then blend them after maturation to create different flavour profiles and a pretty damn smooth product.

The Myth Of The Brown Vodka

Canadian whisky is known for its smoothness, has flavour notes of sweet vanilla, caramel toffee. Often there are tasting notes of honey and fruit. Different flavours are attributed to different ingredients in the mash. 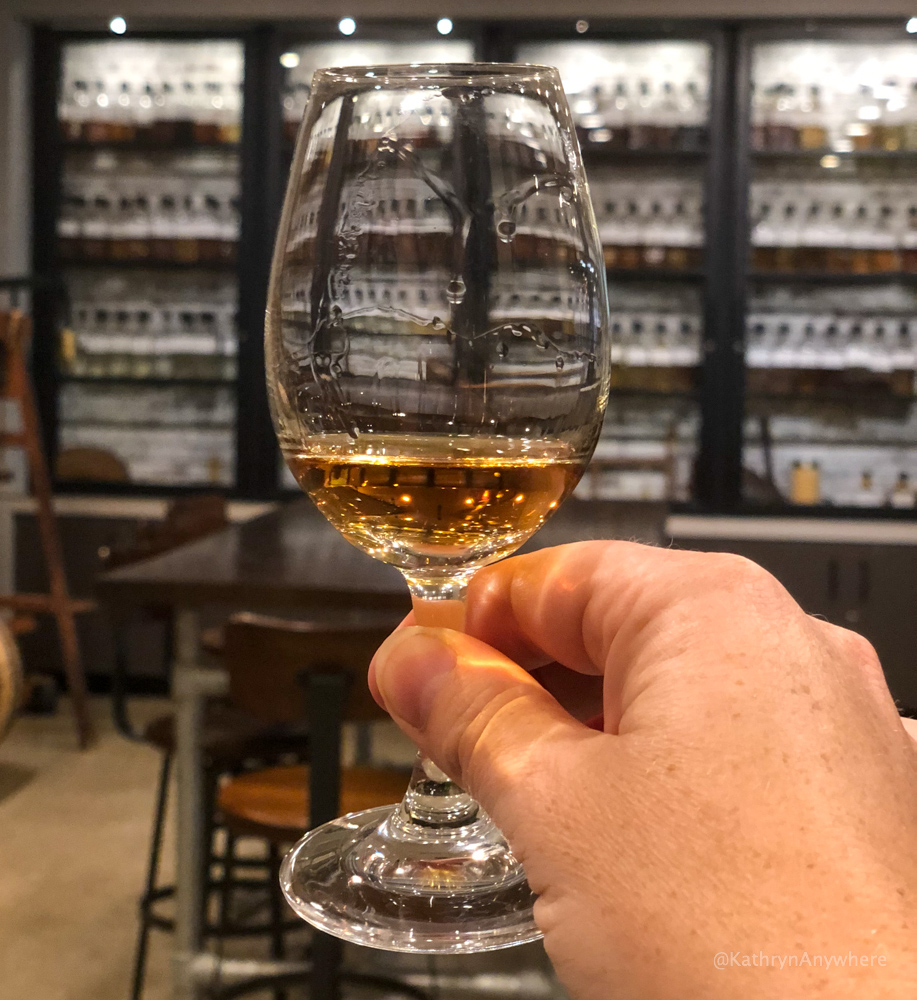 Why is J.P. Wiser Whisky Made at Hiram Walker?

The American Civil War lasted from 1861 to 1865. Most bourbon distillers in the U.S. were located in the south and that meant that their whisky could not be transported and sold in the north. So, Canadian farmers and distillers were needed to send whisky south of the border to satiate the thirst of the northern Americans. Whisky was also used by doctors and medics as a disinfectant for wounds. I’d be crying over spilling whisky on my legs!

BUT, following the Civil War and the First World War, in the United States was a long period of prohibition. Prohibition dealt a really heavy blow to the distilleries in the United States, the Canadian distilleries were no longer operating at full capacity and values dropped substantially, even with all the bootlegging that was happening. Not only was it illegal to sell bottles of alcohol, but the bars were also closed, rendering all sales of alcohol illegal.

Times were so bad, this allowed for one businessman, Harry Hatch, to buy four out of the five largest whisky distilleries in Canada: J.P. Wiser’s, Corby Distilleries, Hiram Walker & Sons and Gooderham & Worts. And Hatch did so within a ten year period. They were all sold for a basement bargain price. And this is the consolidation of the Canadian whisky industry. 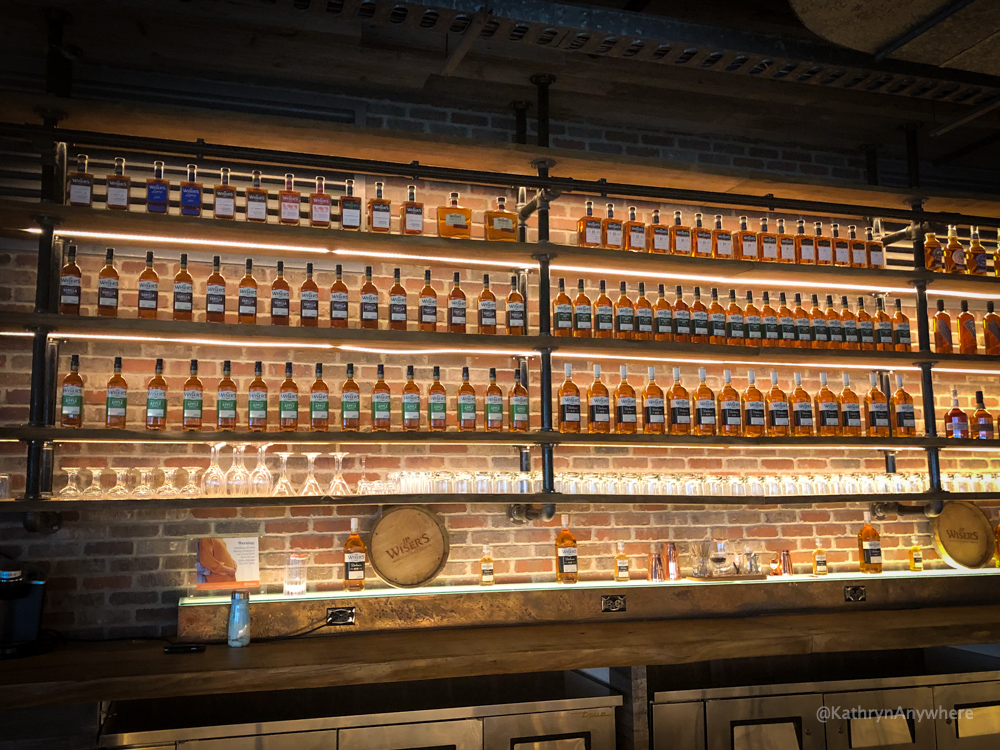 Now, let’s get on with the Hiram Walker Whisky Tour! The J.P. Wiser’s Experience takes you backstage through the production facility. You get to experience the story of Canadian whisky – from its vibrant history to the craftsmanship and process behind making it.

We had a guide for the whisky tour group – obviously, they would not allow us to wander alone and unsupervised. All tour attendees have to be legal drinking age, which is 19 in the province of Ontario. In order to participate in the tour, participants are required to wear closed-toe shoes. The J.P. Wiser’s Experience is approximately 90 minutes long. Important to note – the whisky tour is not suitable for anyone with mobility, heart conditions or balance disorders. We climbed the stairs numerous times and there were some precarious walking paths on the plant floor.

I can’t give away too much of the behind the scenes information, because it’s on a need to know basis. As in, you will need to take the tour. I can explain the production process though. 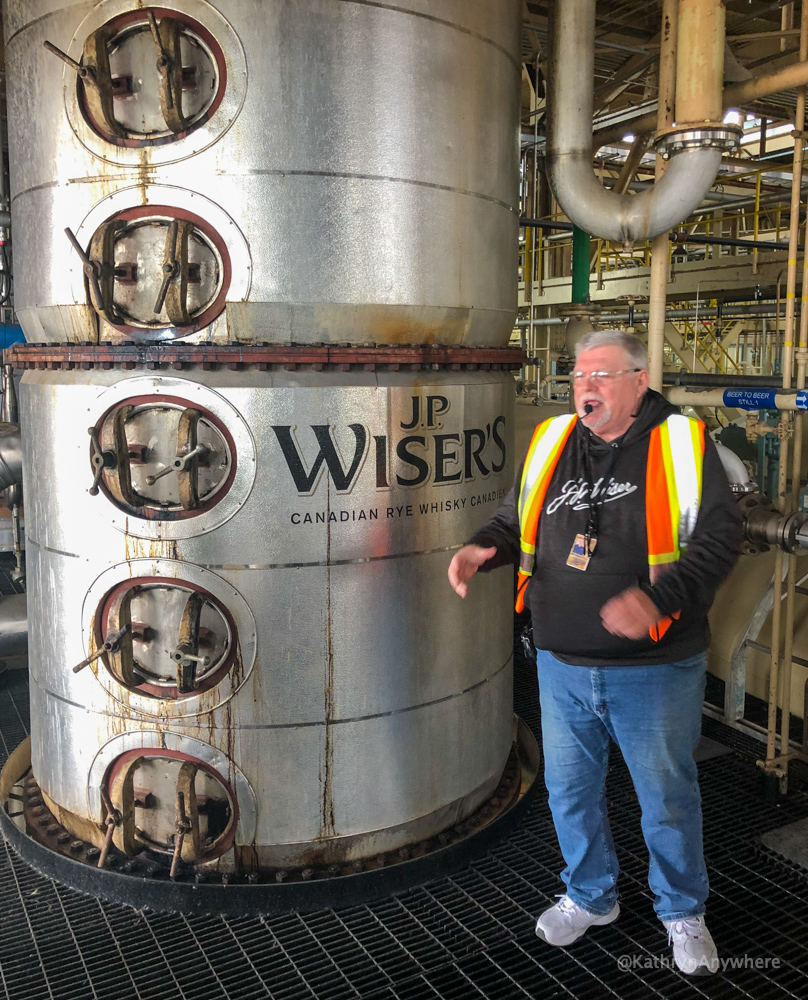 First in the process is milling and cooling. In the Hiram Walker Whisky Tour, you get to go onto the plant floor. The grains are milled to a fine flour to expose the key component, starch for the cooking process. J.P. Wiser’s sources all their grain from Canadian farmers. Each grain provides a different taste in the whisky. Corn gives a sweet creamy taste, barley provides a nutty flavour, rye leaves a cinnamon and clove spice character while wheat is the bread palette.

The flour gets transferred to a tank where it’s cooked to 75 degrees celsius, to break it down into simple sugars. As mentioned above, Canadian whisky makers are free to use any combination of grains in their blends. J.P. Wiser’s whisky is made with corn and rye. Goooderham & Worts with corn, rye, barley and wheat. Lot 40 is made with 100% rye. 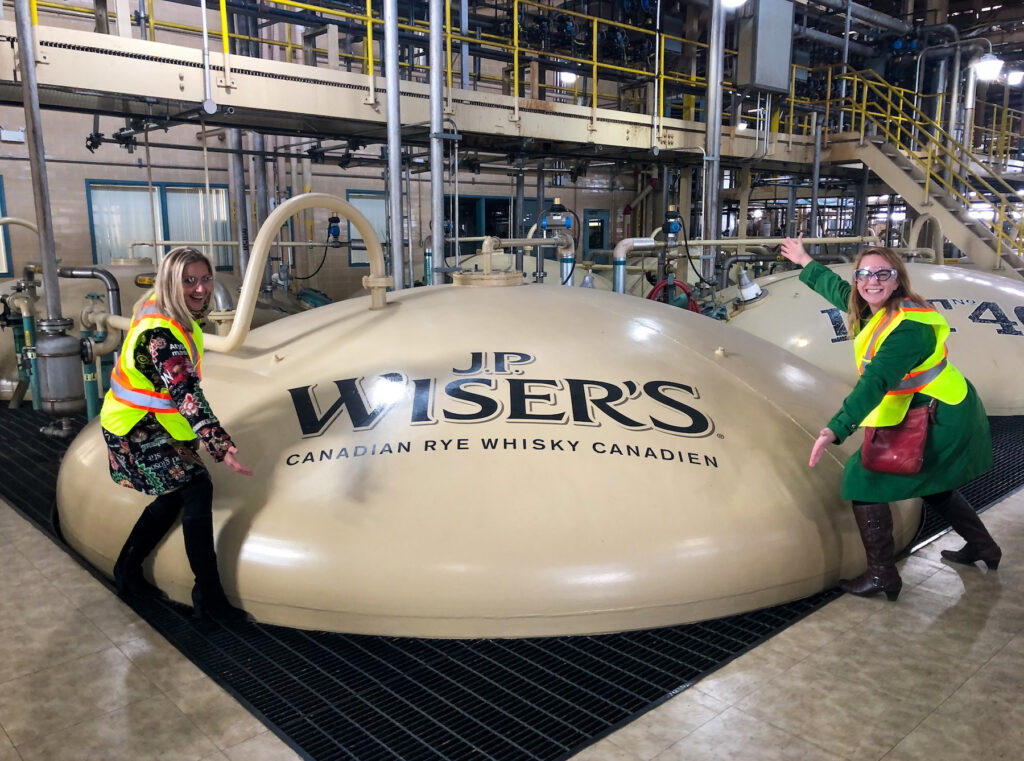 The J.P. Wiser’s experience next takes you to the fermentation area. The liquid called a mash is sugar-rich and is then moved to a fermentation tank. This is where yeast is added. The yeast consumes the sugar and transforms it into equal parts of alcohol and carbon dioxide. After three days, the fermentation creates a distiller’s beer that will reach an ABV of 14-16% for corn and 8-10% for rye, barley and wheat. This process creates five different flavours: fruity, floral, grassy, soap and sulphur.

On this Hiram Walked Whisky Tour, I did get to stick my finger into the mash, which was distilled corn. It wasn’t boiling hot as I expected, but in true “what am I thinking” fashion, I licked my fingers. It tasted awful. I seriously need to stop volunteering to do things first. 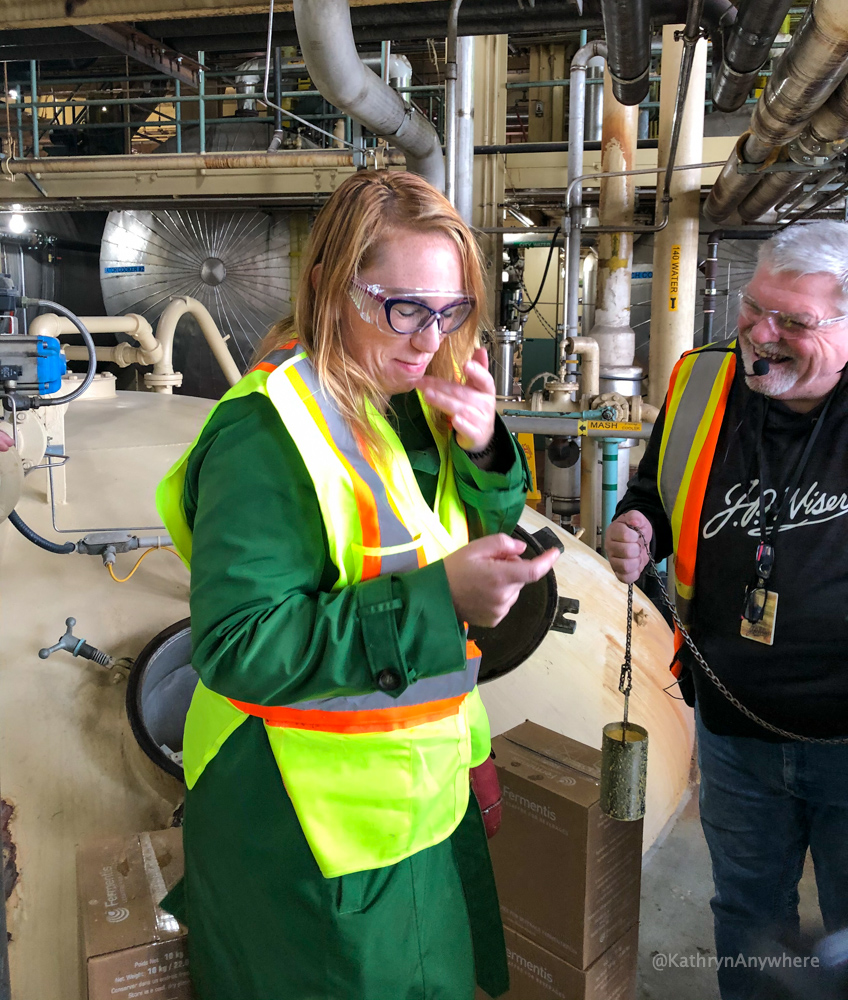 The next stop on the J.P. Wiser’s Experience is the distillation process. This is where liquids are separated based on their boiling points. Science lesson, if you have ever cooked with alcohol, you will have learned that alcohol boils at 78 degrees celsius and water will boil at 100 degrees celsius.

Distilling in a copper removes the sulphur smell and flavour. Canadian whisky distillers use different types of copper stills, depending on the grain they’re using and the flavour profile they’re looking for. J.P. Wiser’s whiskey starts with one pass through a tall copper, cylindrical beer still, which boils the distiller’s beer and turns it into a grain spirit. 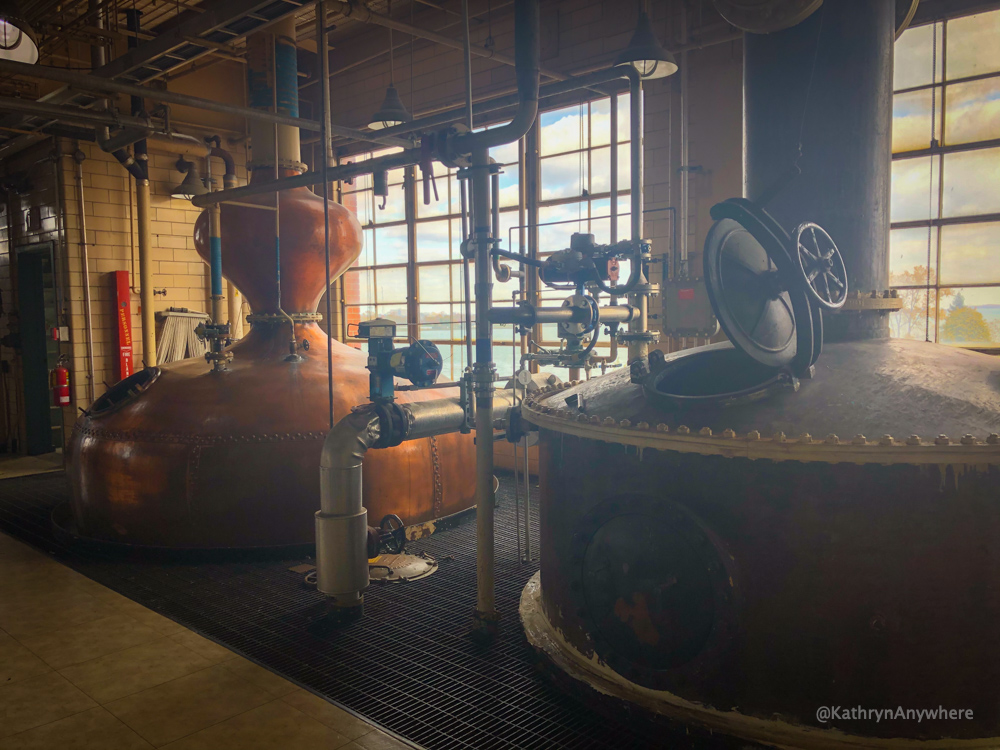 From here, depending on the blend, they move on to one of the three possible steps: 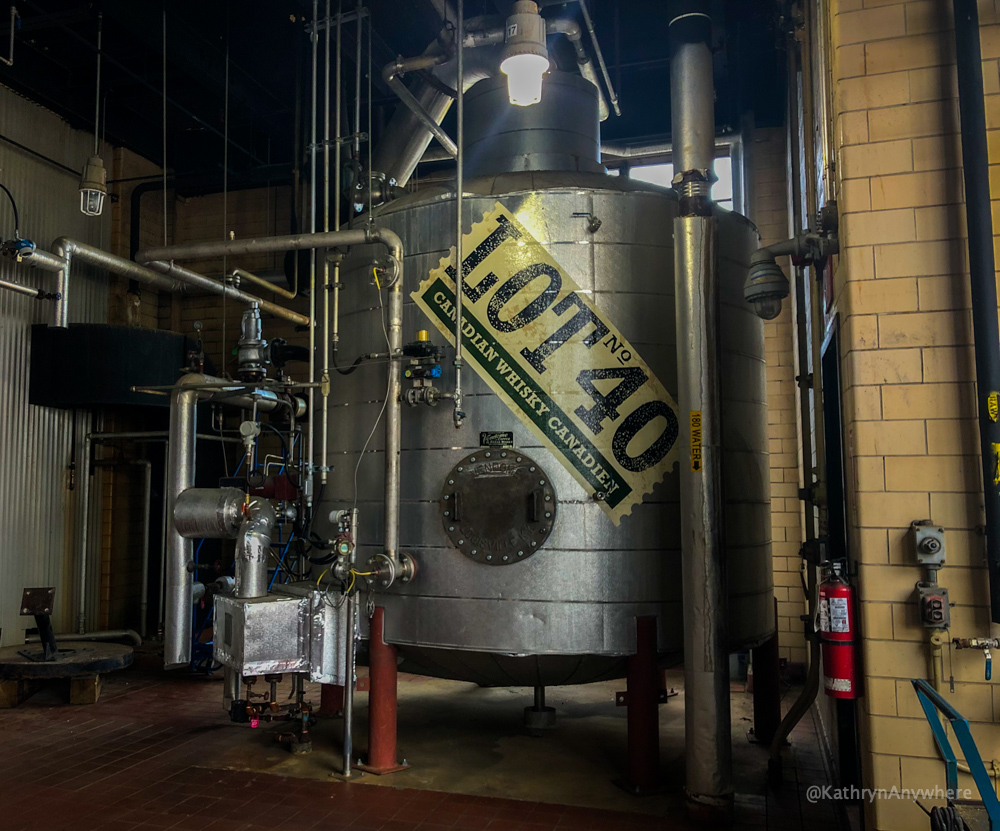 How do you drink your whisky? Neat? With water? On The Rocks? With Ginger Ale? Other?

The Hiram Walker Whisky Tour concludes with a sampling session of some of the award-winning whiskies from the distillery. It was like years of sweet history in my mouth. We tasted J.P. Wiser’s Deluxe, J.P. Wiser’s 15-year-old, Lot 40 and Pike Creek. Lot 40 is the one I liked the best. Notice the glasses in the photo below – we sampled with a snifter. Not to be confused with a wine glass, a snifter has a narrow top that traps the aroma inside the glass. The rounded bottom allows the glass to be cupped in the hand. Body heat from the hand warms the whisky. 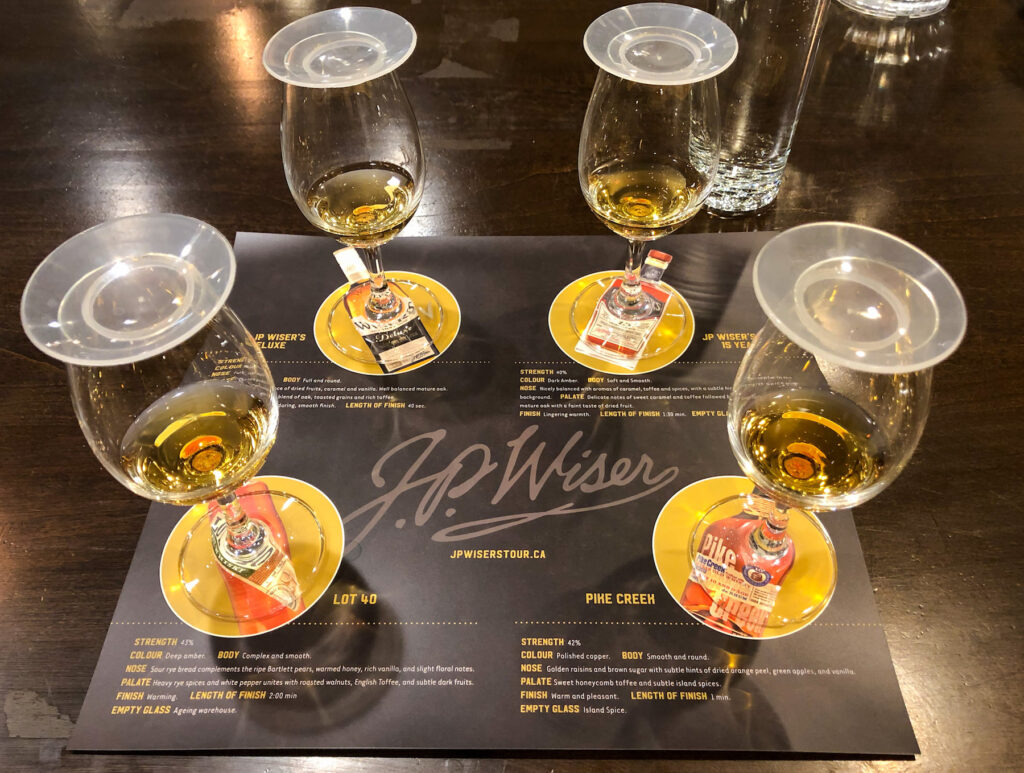 Prior to the J.P. Wiser’s Experience, also known as the Hiram Walker Whisky Tour, I completely lacked all appreciation for how to properly taste whiskey prior to this tour. It’s a true art! 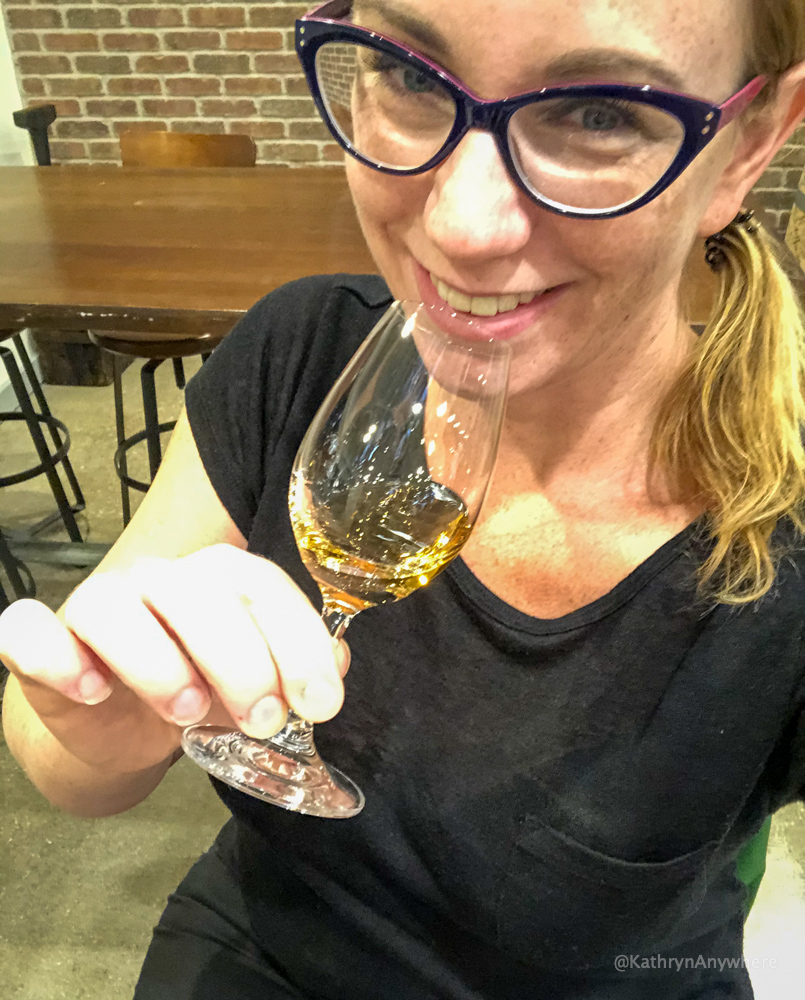 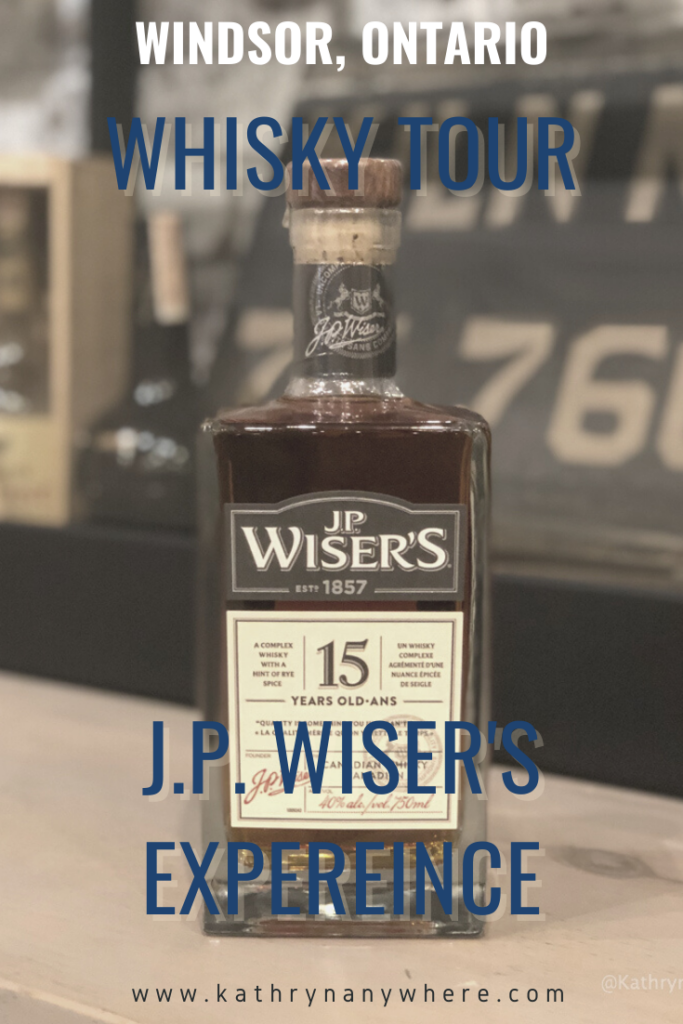